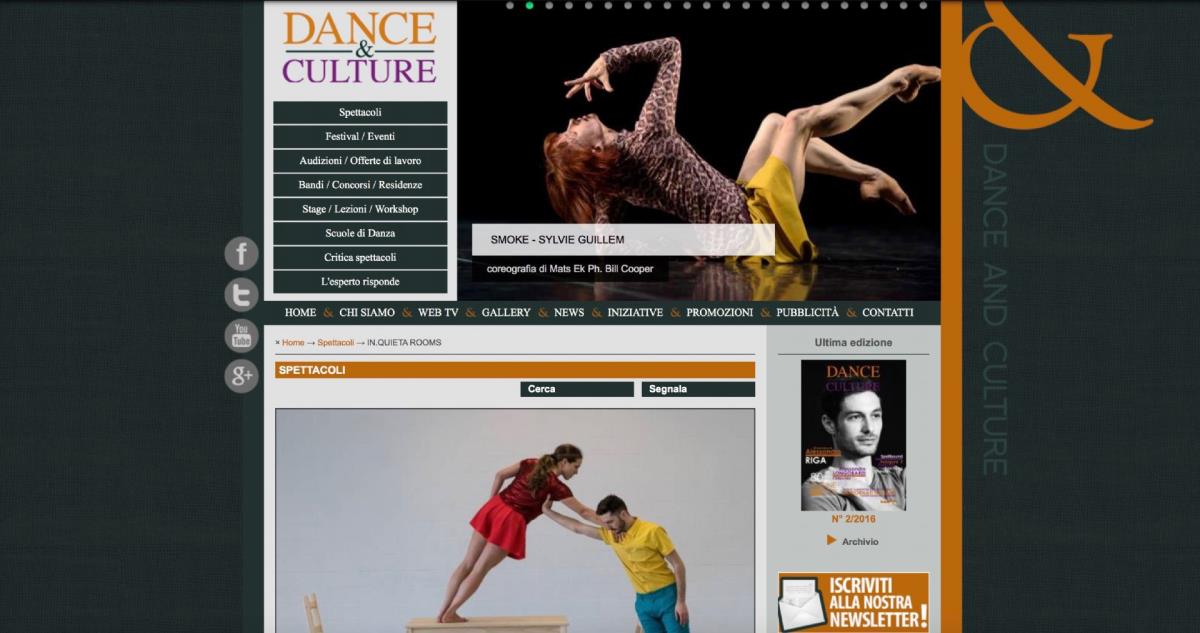 After the great success of the dance performance „WAY OUT“, the new creation „IN.QUIETA ROOMS“ by Nunzio Impellizzeri celebrates premiere on 10th February 2017 at Theater am Gleis in Winterthur, Switzerland.

What happens when a relationship decays into a meager routine and inner desires remain unfulfilled? “IN.QUIETA ROOMS” displays a couple, which is victim of a falsified version of life. They look for their luck outside of themselves. Image and reality mingle and bring their relationship out of balance. They live symbiosis and rejection at the same time and more and more they become entangled in a seemingly insoluble captivity.

Is the real reason behind the restlessness of our current era due to the fact that we cannot share our private thoughts with one another?
IN.QUIETA ROOMS refers to the two rooms in which Quieta and her husband live. Both suppress the expression of their inner desires, and their relationship decays into a meager routine. Distorted ideas about life, and the confusion of appearance with reality lead the couple into a seemingly dead-end situation. In his latest creation, the choreographer Nunzio Impellizzeri guides the focus of his storytelling between obscure dramatic art and emotional, stylistically fascinating scenes.

Between the internationally renowned composer and musician Selma Mutal from Paris and Nunzio Impellizzeri developed a unique artistic synthesis. Her work for IN QUIETA ROOMS is an original music commission exclusively written for the creation’s performance.
www.selmamutal.com

About the choreographer Nunzio Impellizzeri

Nunzio Impellizzeri was born 1980 in Acireale, Sicily and presently lives in Zurich.
The vast dance aesthetics and the pictorial language of Nunzio Impellizzeri has been not unnoticed over the previous years: numerous performances und a dance film award in 2016 made him an international recognized choreographer.

The dance short film „QUIET... DISQUIET / Quieta... Inquietudine“ made it out of 264 films to the top at the Online-competition 60secondsdance in Finland. The prize was awarded on 10th April 2016 in Helsinki at the Loikka dance film festival.
In the same year Nunzio Impellizzeri was invited by Zurich Landesmuseum to create a choreography for the opening of the new building.
With the creation „#Il_prete_rosso“ for the dancers of the BA/Contemporary Dance - Zurich Hochschule der Künste, he gave an important contribution to the Swiss dance. With the work “WAY OUT” Nunzio Impellizzeri toured with his company at the Skorohod Swiss Week in St. Petersburg, Russia and at Freier Tanz im Delta in Mannheim, Germany.

Visual Arts decisively influence the choreographic work of Nunzio Impellizzeri. After his studies in Art, with specialization in painting, sculpture and costume, dance was the peak of his artistic training. Nunzio is simultaneously a choreographer, costume designer and scene designer for many of his works, which are characterised by an extreme attention to detail.
Nunzio's productions are born from his personal observation of human existence and social contexts. He wishes to lead the spectator to reflect and question social phenomena. Intricate movement patterns are impregnated with an intense physicality to convey a clear dramaturgy.
www.nunziodance.com

About the dancer Irene Andreetto
Irene Andreetto was born in Mestre, Italy in 1986. After her dance education at the Balletto di Toscana-Florence, she made her first professional experience with Europa Danse. From 2007 to 2012 she is a member of the Ballett Basel and a solo dancer with the Bern Ballett. In 2012 she becomes an independent dancer and collaborates on various national and international projects (u.a. Marcel Leemann Physical Dance Theater, Opernhaus Zürich, Gessnerallee Zürch, Theater Basel). In 2015 she becomes the manager of Unplush, she assists the creation of different pieces (Cie Dysoundbo, Joshua Monten) and she is a board member of BETA – Verein Berner Tanzschaffende. Since August 2015 she is a candidate for the MAS Dance Science at the University of Bern.
In 2016 Irene Andreetto danced in the Performance Happening and is since then member of the Nunzio Impellizzeri Dance Company.


About the dancer Albert Garcia
Albert Garcia born in Spain, he trained classically at the Conservatori Superior de Dansa Illes Balears, before training in contemporary dance at the Conservatori Superior de Dansa de l’Institut del Teatre in Barcelona. Over his career to date Albert has worked with Gwyn Emberton Dance (UK), James Cousins Company (UK), Cascade Dance Theater (UK) Icosaèdre Dance Compagnie (France), IT Dansa Jove Companyia (Barcelona), and Tanzkompanie Oper Graz (Austria) performing in works by a range of choreographers including James Cousins, Alexander Ekman, Ohad Naharin, Rafael Bonachela, Stijn Celis, Sidi Larbi Cherkaoui, James Wilton, Natalia Horecna, Itamar Serussi, Tilman O’donnell, Rosana Hribar, Catherine Allard, Marilen Iglesias-Breuker, Jiří Kylián, Luc Petton and Darrel Toulon.
Besides his dance experience, Albert is fully qualified in different holistic energy work techniques and methods. He is currently teaching and developing the Noitome Method in workshops and classes that he carefully developed during the past few years in schools in Austria and the EU while continuing to perform as a freelancer in the UK.
Since 2016 is a member of the Nunzio Impellizzeri Dance Company.

About the composer Selma Mutal
Born in Lima (Peru) to Dutch parents, Selma Mutal studied composition at the National Conservatory of Amsterdam and Film Scoring at the ‘Ecole Normale de Musique’ in Paris. She has always possessed a keen interest in composing for the cinema, theatre and contemporary dance. Some of her projects include director Claudia Llosa’s film ‘The Milk of Sorrow’ (Berlin Film Festival Golden Bear Winner and Oscars Academy Nominee for Best Foreign Language Film). She also composed the soundtrack for ‘Undertow’ directed by Javier Fuentes-León that received various awards including the Audience Award for Best Film at the Sundance Festival and Best Original Soundtrack Award at the International Film Festival of Annonay.
Selma Mutal has also scored the music to several projects directed by American filmmaker Tod Lending including “All The Difference” (2015), a film inspired by Wes Moore’s New York Times bestselling book, 'The Other Wes'. In 2016 Selma Mutal also composed the soundtrack for 'EDERLY' directed by Polish film director and animator Piotr Dumala, best known for his film ‘Franz Kakfa’.
Selma Mutal’s compositions have also been included in dance video projects screened at various ‘Dance on Screen Festivals’. Selma Mutal lives and works in Paris.